“He’s just so cool Charlie, he even carry’s a gun!”

“I’m not sure about that Carter, Guns scare me.”

“Yeah well he only uses it on bad people.  Maybe he would let us hold it!”

“And what makes you think mum will like him,” Charlie asked now totally convinced by the policeman as a potential new dad.

“Are you boys not in bed yet,” Bella asked storming into the bedroom and interrupting Carter just in time.

“Well hurry up, its way past your bedtime and I think you have caused enough trouble for one night don’t you? Now get in your pyjamas, lights out in ten minutes.”

The moment Bella’s back was turned, Carter turned and winked at his brother.  He would tell him everything on their way to school tomorrow morning.

As soon as the clock struck 2pm the following afternoon, Charlie and Carter sped out of school and ditched the bus home to head into the city.  They arrived at the Police Station an hour later full of excitement and trepidation.  “Are you sure about this,” Charlie asked turning to his brother

“Absolutely,” Carter replied more convinced by his plan than ever.

“Excuse me miss,” Carter said stopping a policewoman on her way out of the station. “I was wondering if you could tell me where I can find Officer Digby?”

“Sure hun,” she replied sweetly. “He’s over at the Diner getting lunch.  If you see him tell him that Mary is looking for him too will you.”

The Diner was only across the road so Carter and Charlie ran over there as fast as they could. They had been to the 50’s inspired Diner a few times with their grandmother but had not been back since she passed away.  She told them that she had once worked there as a young girl but they did not believe her, what would a superstar actress being doing working at a Diner? 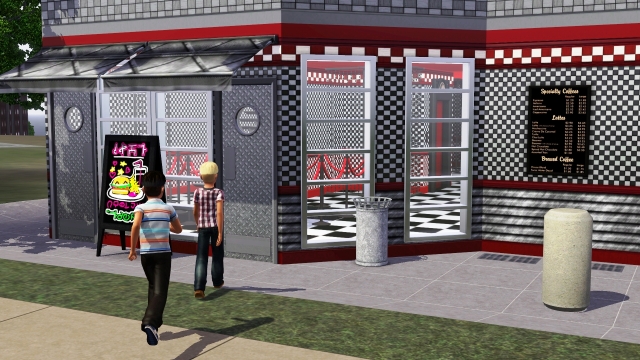 They spotted Officer Digby the moment they walked in. He was sitting in a booth with another policeman tucking into a plate of French fries.  “Hello Officer Digby,” Carter chimed bounding over and taking the seat next to him.

“Hey there little man,” the officer replied surprised to see him.  “No offence kid, but I was kind of hoping I wouldn’t be seeing you again so soon.”  He then turned to his friend sitting next to him.  “Hey man this was the boy I was telling you about.  He had me out half the night looking for him and his friend.”

The other cop laughed like they had shared a secret joke and Carter suddenly felt very ashamed.  “Yeah I am sorry about that Officer Digby.”

“It’s no worry little man, just doing my job.  Now what can I do for you?”

“Well,” Carter started taking a deep breath and psyching himself up. “My mum is cooking dinner tonight and she asked me and my brother to come down and invite you over as a thank you for helping her last night.” 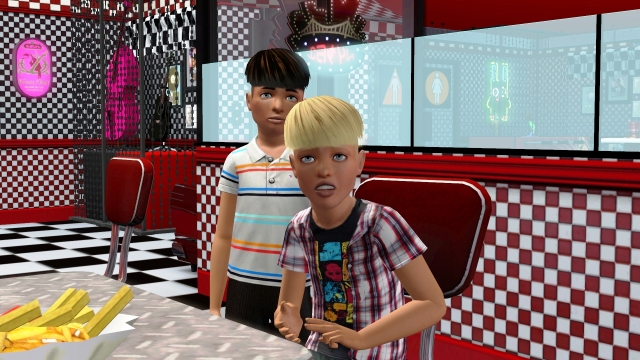 The officer glared back at Carter, looked over at his friend and then back to Carter rubbing his neck.  “Gee kid, I’m not sure if it’s appropriate for me to be having dinner with civilians, being an officer of the law an all.”

“Oh please,” Charlie suddenly chirped in.  “Mum makes the best Mac and Cheese and I know it would mean a lot to her if you would come.”

Officer Digby once again turned to his friend and they both burst out laughing.  “Well I could hardly turn down an offer to sample the best Mac and Cheese could I?  Count me in kid.”

“Yay,” Carter cheered.  “It will be the best I promise.  See you at 6pm.” He jumped off the seat and him and Charlie ran home congratulating themselves on the completion of phase one of the plan.

“I’m trying but the cheese is really sticky.”

“Hey boys are you sure you don’t want some help,” Bella asked coming into the kitchen from the lounge where she had been relegated to for the past hour. 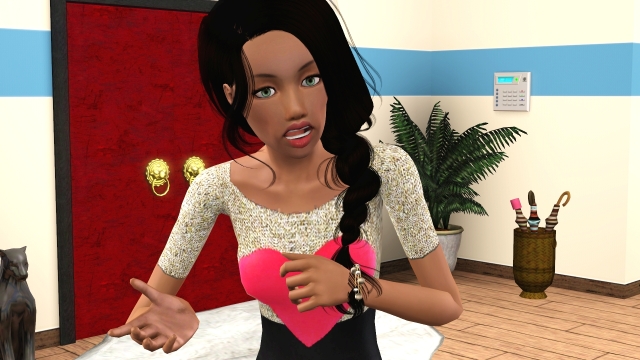 “Charlie and I are cooking dinner tonight as a surprise for you so go back to the lounge and we’ll call you when it’s ready.”

“Ok ok,” Bella said putting her hands up in defeat and skulking off back to the lounge.  It was sweet that the boys wanted to surprise her but she had never left them alone in the kitchen before and she could not help but be a little concerned. 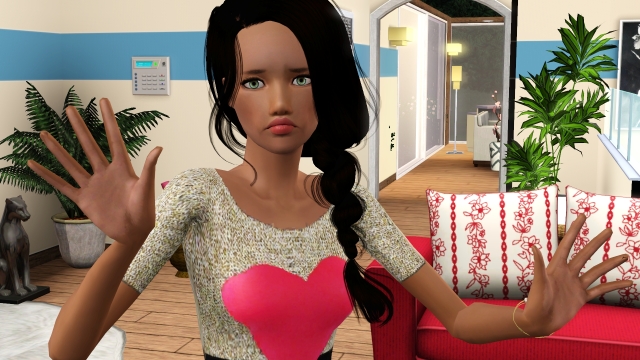 When she was back out of site, the boys couldn’t help but start to giggle. “She is totally buying it,” Charlie laughed.

“I told you she would,” Carter replied unable to stifle his amusement. 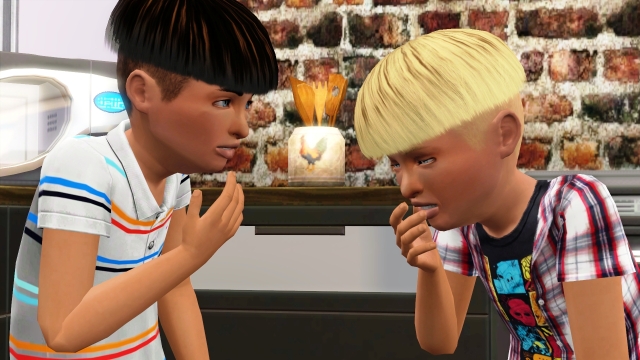 Ten minutes later the doorbell rang.  Carter set the wooden spoon he was using to stir the Mac and Cheese on the stove and ran off to get it.  “I’ll get it mum,” he shrieked seeing Bella also coming forward to answer the door.  “You go in and relax.”

“Ok,” Bella replied getting a bit exasperated by not being allowed to do anything.  “Geeze.”

Carter waited until Bella was back out of site and then swung the big heavy door open.  “Hey little man,” Officer Digby said letting himself into the house and ruffling Carter’s hair.  “Where’s your mum?”

“Oh err… she’s in the shower, she will be down in a minute,” Carter replied having to think quick.  “Charlie and I are just finishing up dinner for her. Why don’t you sit down and I’ll get you a drink.  Is a beer ok?”

“Sounds great, thank you kid,” Officer Digby replied allowing Carter to show him to his seat at the Dining table. He sat looking around the house noticing the pot of Mac and Cheese burning on the stove.

“Are you boys ok in there,” he called wondering if he should help.

“Yeah everything is fine thanks,” Carter called back while Charlie took the charred food off the stove and dropped it heavily into bowls.

“Dinners ready,” Charlie called serving Officer Digby the brown sludge and laying a second bowl opposite him. “I’ll just go and get mum.” He sped off leaving Carter and the officer alone.

“This looks great,” Officer Digby said trying to make Carter feel better by the charred remains of food in front of him.  “How come there are only two places?  Are you guys not eating?”

Suddenly Charlie and Bella appeared behind them.  Bella looked from Carter to Officer Digby and then back to Carter and scratched her head.  “Err, what’s going on here,” she asked?

“Please sit down mummy,” Charlie said trying to pull her by the hand towards the table.

“Not until you tell me what is going,” she continued.

Feeling awkward and suddenly realising what was going on, Officer Digby tried to stand up.  “Err I’m sorry mam, I think there has been some mistake. I thought you…” 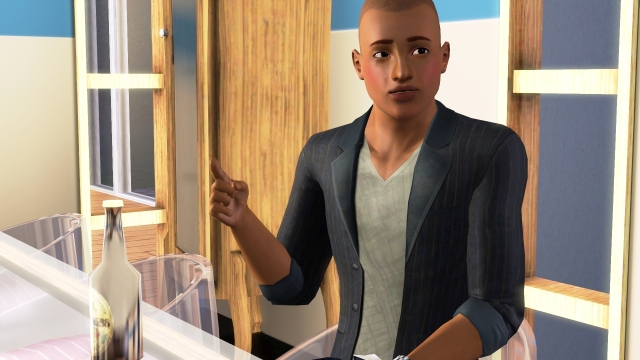 “Pleeeessssseee sit down mummy,” Charlie interrupted.  “Please?”  He pouted his lips and gave her the biggest puppy dog eyes he could muster.

“Ok, Ok,” Bella replied knowing exactly what the children were up to and not having the heart to destroy it all for them.

She seated herself opposite Officer Digby in silence watching while the boys poured them each a glass of wine and lit a candle on the table, sprinkling rose petals around it.

They then turned off the lights and ran out of the room. 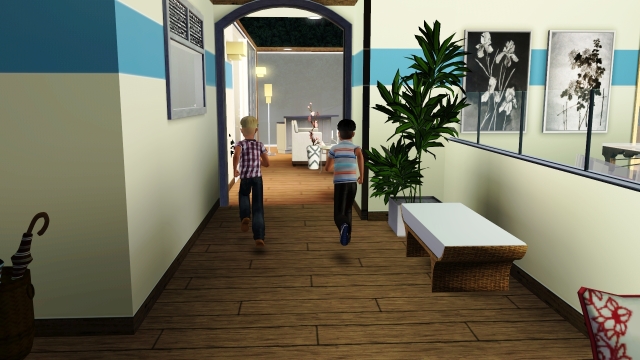 Bella and Officer Digby had been stunned into silence.  Had that just happened?

Eventually they both looked up and as their eyes met, they burst out laughing.  “I think we’ve just been set up,” Officer Digby chuckled.

“I am so so sorry,” Bella giggled back.  “My boys just have an overactive imagination sometimes.  You don’t have to stay.”

“Well it would be a shame to put this lovely Mac and Cheese to waste now wouldn’t it?”

“And the boys did work really hard.”

“Well then, the least we can do is eat if for their sake.” 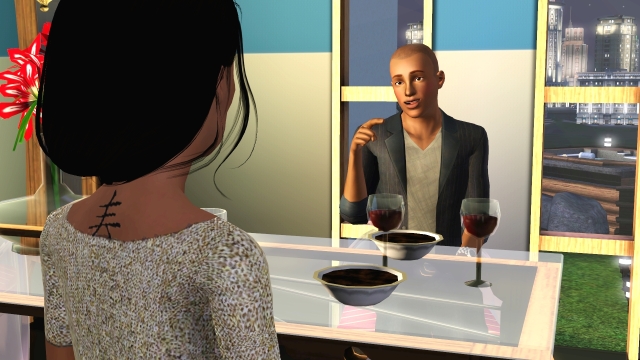 They both dipped their spoons in the mixture and winched at the sight of it. “Thank you,” Bella said.

“Thank you for what,” the officer replied trying to swallow the gloop on his spoon.

“Thank you for being so nice about my boys.  It seems they really like you officer.”

“Well I like them too, they’re great kids.  But one thing, please call me Lee.”

“And please call me Bella.”

“We did it,” Charlie whooped while Carter cheered on at their triumph.