Georgia did not go back into the house that night after Luke left.  She flopped back to the ground, kneading herself into the warm spot where Luke sat just a few moments before, wondering what had just happened.  What was he so scared off?  Why did he keep pushing her away? 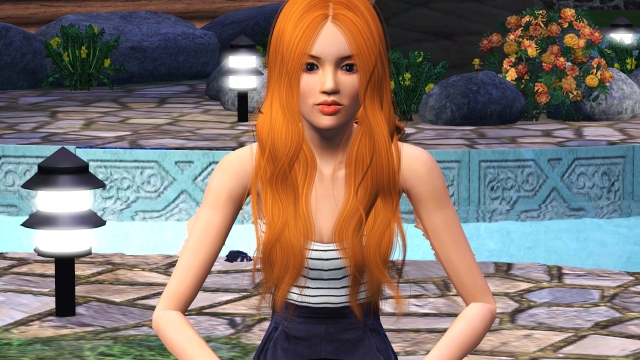 She gazed up at the stars and retraced the constellations Luke had pointed out to her.  She had given up on believing in fate and the universe years ago but maybe she shouldn’t have. Fate was what brought her and Luke together in the first place.  Maybe it could do it again?  She pondered this thought for a while and then realised that if she wanted to make things happen she needed to do them herself.  The universe was taking too long!

She pulled herself up off the dirty ground and sprinted to her car.

It was late now. Georgia was not sure of the time but it must have been almost midnight when she passed over the bridge into the city.  She had never been inside Luke’s apartment before, but had picked him up on numerous occasions so she knew exactly where she was going. 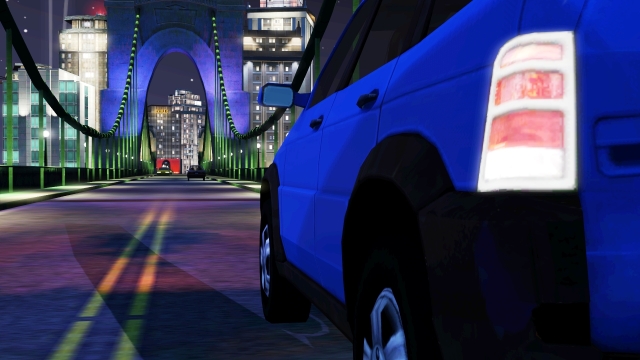 “Luke it’s me,” she yelled into the income out of breathe by the sprint from the car to the door.  “Let me in.”

“Georgia what do you want?  I don’t want to talk anymore.”

“I don’t want to talk either.”

There was a silence at the other end and Georgia could hear Luke breathing heavily down the line.

“If you don’t let me in I will sleep here on this doorstep and we both don’t want that in this neighbourhood.”

A second later the intercom buzzed and Georgia knew it was her cue to go on up. 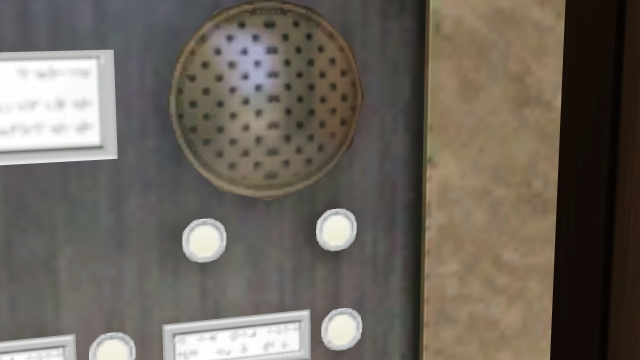 When Luke opened the door his eyes were all blood shot and swollen.  He tried to hide his face from her but Georgia held it gently in her hands and looked him in the eye. 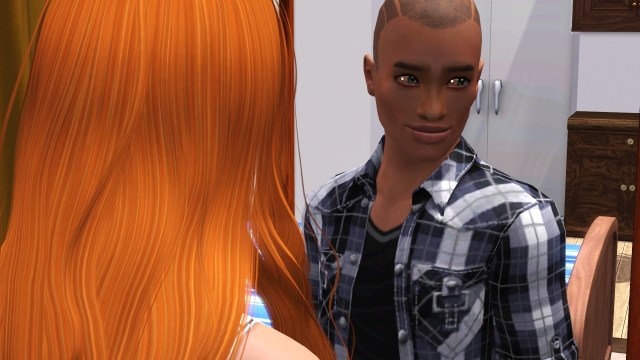 “No talking,” she said and then kissed him. At first he tensed under her touch. Then like an animal he grasped hold of her and buried his mouth hard against hers.  He pulled at her dress, the straps forced down by his hands. She stepped out of it and pulled Luke’s shirt from over his head.  Like two animals they clawed, pawed and bite at each other falling down against the bed in the one roomed apartment.

Georgia went to take it further and Luke stopped her.  “I can’t,” he whispered.  “My injury.  I don’t think I can.” She saw a tear tricked from his eye and she swept it up with her finger tip.

“I don’t care,” she whispered back.

They still spent the night together.  Not necessarily making love, but just being together. In Luke’s arms Georgia felt safe for the first time in her life.  “This is where I’m meant to be,” she whispered to him as they watched the sun rise against the backdrop of Bridgeport.

“But what about my condition,” Luke asked.  “I can’t walk properly so I can’t work and support you.  And I may never be able to give you any more children.”

“Mummy mummy!  India stole my doll.  The one with the pink ribbon.” Georgia spun around and looked at her little girls all dressed up in their gorgeous white and black bridesmaids dresses she had made herself.

“Why do you want the doll now my little pumpkin.  Mummy and daddy are about to get married.”

“Come here you,” Georgia said pulling Izzy towards her and snuggling.  She was so happy she was not going to let her two little terrors take anything away. 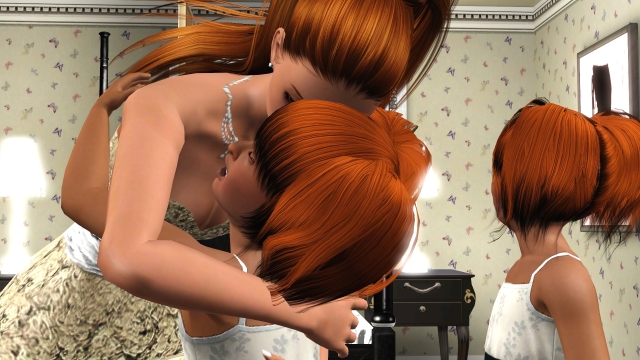 “Are you ready,” Alfie asked appearing at her door.

“Yes daddy,” she replied standing up to her full height and allowing her father to take in her appearance.

“You look beautiful,” Alfie said gulping back the tears.

“Do you really think so?”

“You are the most beautiful bride I have ever seen.”

She embraced her father and could feel him quivering beneath her.  She knew this was just a big a day for him as it was for her.  She could feel herself welling up and started to sniffle.

“Don’t cry yet,” Alfie laughed pulling back.  “You’ll start me off again.”  Georgia laughed along with her father and took his arm, letting him lead her down to marry her soul mate. 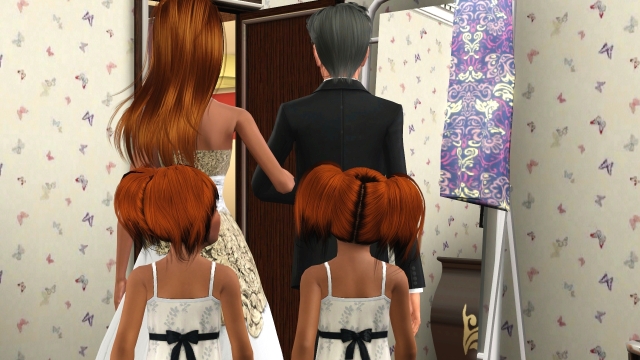 “Do you Luke Merritt take Georgia Starr to be your lawful wedded wife?  To have and to hold from this day forth in sickness and in health till death do you part?” 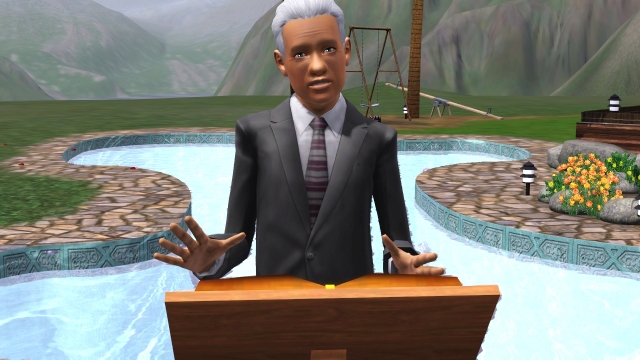 “I do,” Luke said looking at Georgia with the biggest puppy-dog grin on his face.  He slipped the ring on her finger and mouthed the words I love you. 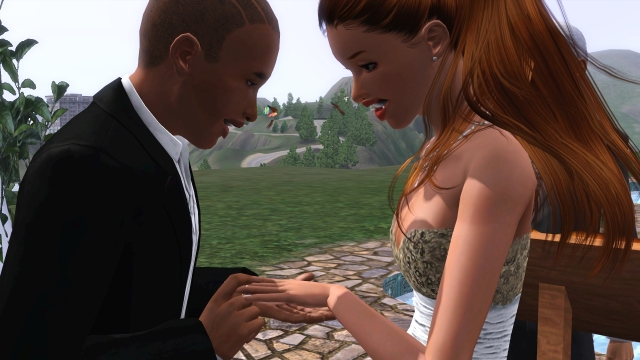 “And do you, Georgia Starr take Luke Merritt to be your lawful wedded husband. To have and to hold from this day forth in sickness and in health till death do you part?”  “Absolutely,” Georgia said slipping Luke’s ring on his finger. 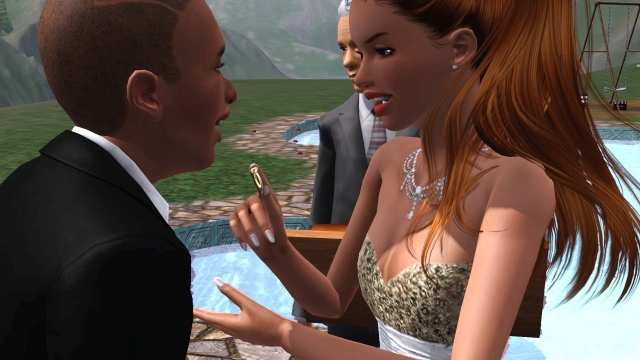 “Therefore with the power invested in me, I now pronounce you husband and wife. You may kiss the bride.”

Georgia could hear the cheering and the giggling of the girls as the priest said those magic words, but it was all background noise to her. All she cared about was that she was married to Luke.  He pulled her into his arms and they kissed for the first time as husband and wife.  The universe was finally as it should be.

Everyone who was important to Georgia was at the wedding. Amy; Howie and Kiki with their twins Hugo and Harriett and even Luke’s father dressed in his military best! 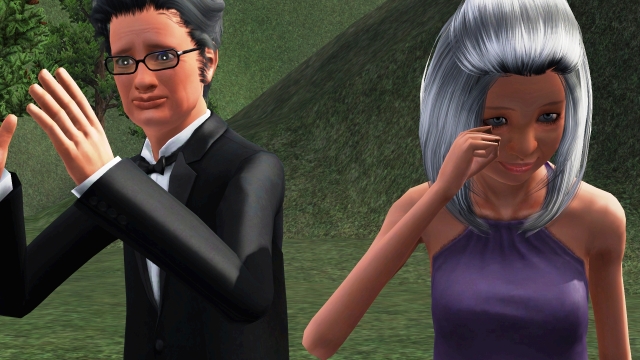 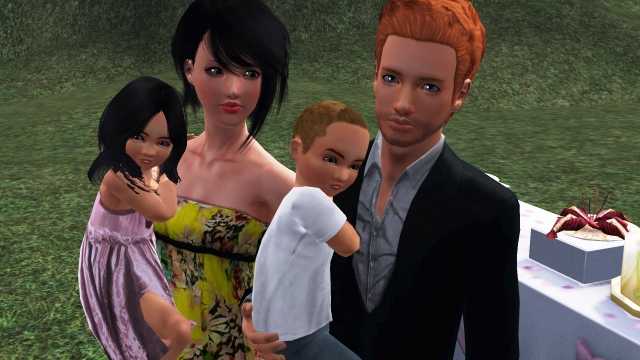 On their wedding night, Georgia and Luke lay in bed holding each other.  “I wish I could give you more,” Luke said.

“Please let’s not go over this again.  You’ve given me everything I want.  Please don’t worry.”

“I do though I can’t help it,” Luke replied.

“Then there is no need to worry.” 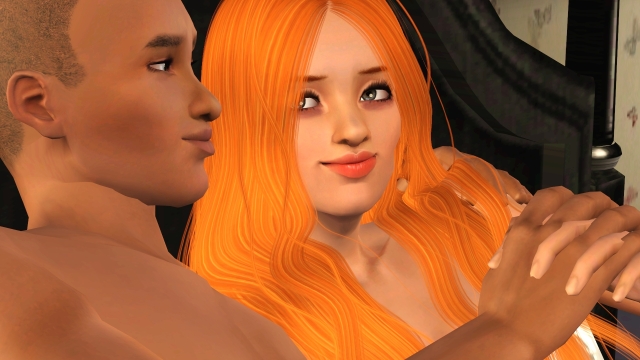 After that Luke fell into a deep slumber but Georgia could not sleep.  She did not care if Luke never gave her any more children or was never able to run a marathon but the bottom line was that he did care.

The next day, she awoke early and seated herself at the computer with a large mug of coffee.  She had drunk far too much champagne the night before but there was work do.

She did not really know where to start.  She Googled Physiotherapists in Bridgeport, but it mostly turned up a bunch of cowboys with fake degrees.  Plus Luke had seen most of them and no one had been able to help.  She then Googled “war injuries” “leg rehabilitation” and mostly the same names as before popped up – except one.  “Jin Ling, master of Eastern Medicine.”  It’s worth a shot, Georgia suppose and dialled his number.

“What are we doing here again,” Luke asked as Georgia helped him up to the little shop door.  It was a rather dilapidated old building in the wrong area of town but Jin Ling had sounded so positive on the phone Georgia could not help but have high hopes.

“We are seeing a doctor to help your leg.” 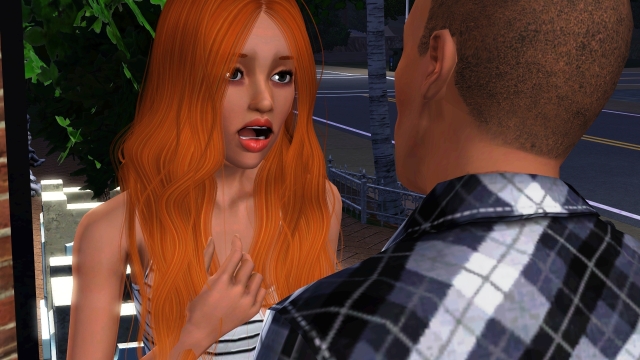 “But I told you I’ve seen every doctor and physio under the sun and no one has helped.”

“But this guys is different,” Georgia said.  “He uses ancient Chinese medicines and cures injury’s from within.”

Luke kissed her on the forehead and they went in. The room was small, dark and musty and there was a small man seated in the middle of the floor doing what Georgia could only describe as meditating.  “Mr Ling,” she asked not sure if she should interrupt. 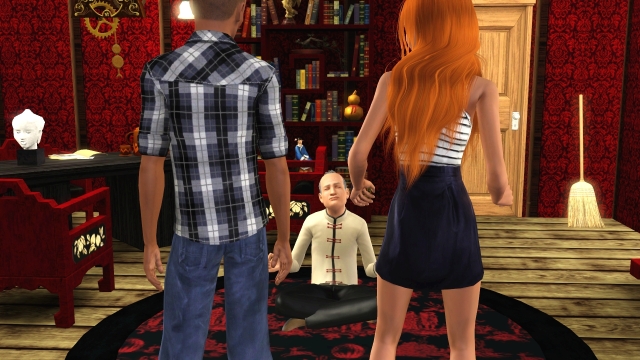 He did not move but snapped opened his eyes.  “Ahh Mrs Starr,” he said beaming at her from across the room.  “So pleased you could make it.”  He took a deep breath and rose from his seated position. 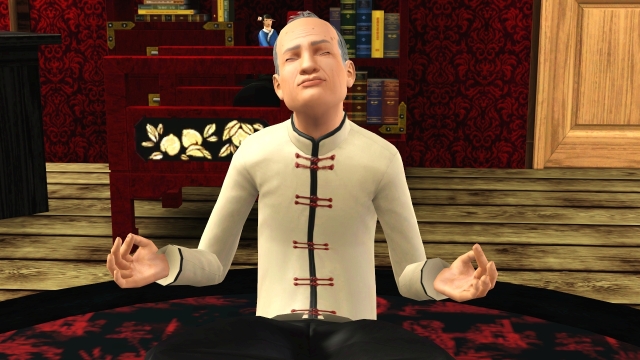 “Please please come through and take a seat.”  Georgia and Luke did as instructed. 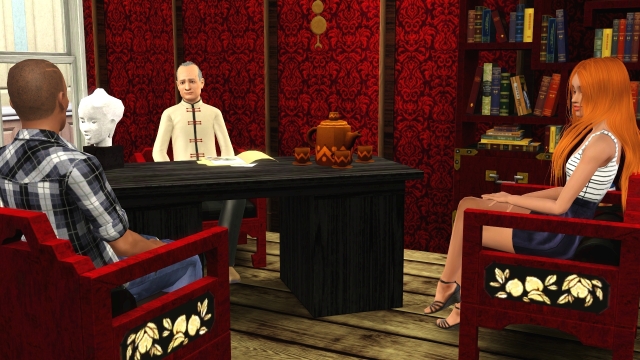 “Now this must be Mr Starr who you were telling me about,” Jin Ling said looking at Luke.

“Yes ok,” Luke replied and Georgia could see him relaxing.

The next two hours were spent with Luke explaining everything to Jin Ling.  His time at war, the accident.  What it had left him with.  Even Georgia had not heard the full extent of it and was shocked to think of her husband in so much pain.

Jin Ling then examined Luke and when all was said and done he uttered the magic words. “I think I can help,” he said.

“Really,” Georgia gasped.  “You really think you can?”

“Yes my dear but its not going to be easy. It’s going to be long and hard and Mr Starr is going to have to work really hard and do whatever I say.  Chinese medicine is all about restoring the balance of Yin and Yang and I’ll aim to free blocked life chi that flows through channels in the body. Be prepared to also make lifestyle changes to help with the therapy, this may include dietary changes or exercise. Chinese Herbal Medicine takes a holistic approach and will require you to make adjustments to achieve results.”

“I’ll do whatever it takes,” Luke said.

“Good good,” Jin Ling said rubbing his hands together.  “Then let’s get started.”

Jin Ling was not wrong when he said it was going to be hard work.  Everything Luke did had to change.  First off he was put on a strict diet of fresh organic meats and vegetables accompanied by Chinese herbs.  As Esme insisted on doing all the cooking in the house, she was a little put out at first for having to change everything for Luke.

“Luke or I will make his food, you don’t have to do anything mum,” Georgia told her. 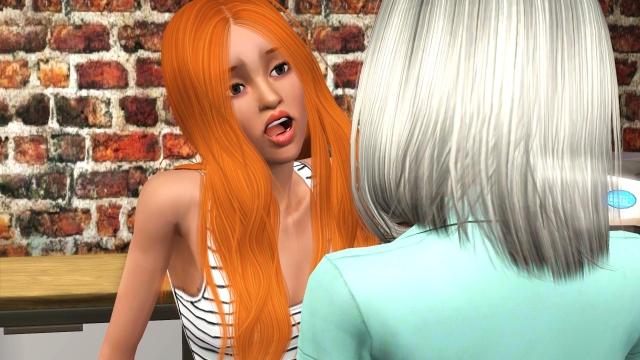 “No no,” she quipped.  “I’ll do it.” Georgia knew there was no use arguing with her mum, she had turned into a stubborn old lady in her old age.

Jin Ling also put Luke on a vigorous exercise programme.  He had to visit Jin’s shop every day and work out on his treadmill.  Even though every step hurt, Jin pushed Luke on and on forcing him to build up the strength in his bad leg and hip.

“Pain is just in the mind,” he told him.  “Push through the pain and it will go.” 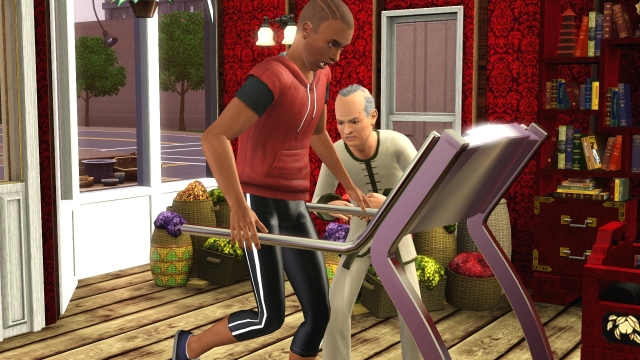 It was the girls who benefited from a stronger Luke first.  It was small changes at first that India and Izzy did not even notice from being able to swim in the pool with their dad to playing on the slip and slide with him.  Being a big kid at heart, Luke loved playing with the girls and when he was able to lift them up and swing them around he knew that everthing Jin was doing, was working.

As a family they were now able to do more stuff together.  Though Luke couldn’t chase his girls yet, he could still play with them and the four of them would spend hours together as a family in the garden.

But it was when Georgia became pregnant that everyone finally understood what a miracle had happened! 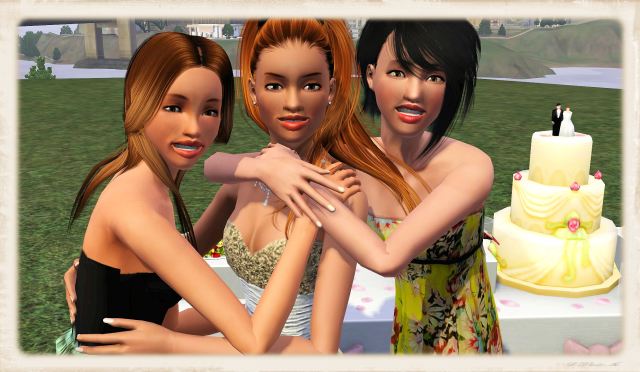 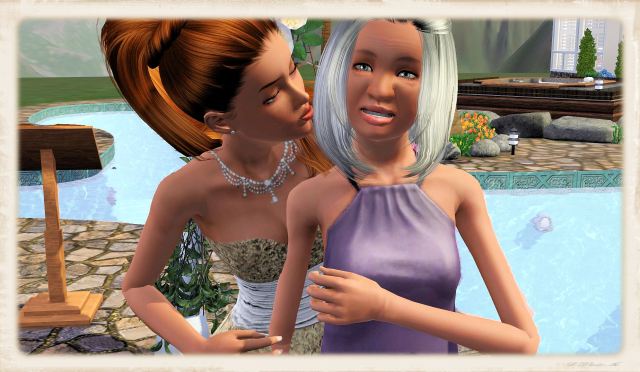 This entry was posted in Generation Five. Bookmark the permalink.